What’s in a name?

All professions use jargon: terms which are familiar to insiders – and not to those outside the fold. It’s partly a kind of secret code, designed to keep people out: if you don’t know what a particular term means, you don’t really know what we’re talking about. But it’s also a simple matter of convenience: why spell something out every time, when you can use a shortcut instead?
In the same way as families or households often have in-jokes – which are a closed book to those outside the circle – companies use in-house shorthand. Some projects might have no name at all until fairly late on in the process. Others might have a secret-sounding appellation: “Project X”. 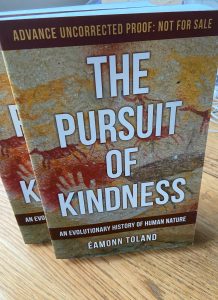 Publishing is no different. Maeve Binchy’s novel Night of Rain and Stars was referred to as “Nora’s book”. And this year in Liberties Press, three projects have pleasing shortened forms. Our current release, Brevity Is the Soul, is, happily, also referred to as “BITS”. Next up is “PoK”: The Pursuit of Kindness by Éamonn Toland. (OK, nothing’s perfect, but “pok” is close enough to both “pock” and “puck”.) And after that comes A Gilded Age by Owen Dwyer. It was originally *The* Gilded Age, but Owen noticed that this was also the title of a satirical novel co-authored by Mark Twain. Choosing the same name as something else isn’t necessarily a problem – unless you’re deliberately trying to steal someone’s thunder – but it’s certainly useful to avoid confusion in the mind of the public. The change gave us another nice acronym: “AGA”. Sometimes the stars (or perhaps even, particularly in Ireland, the rain and stars) align.
We hope that, if you order a copy of Brevity Is the Soul, it arrives in one piece through your letterbox (or at the door of your local bookseller). Similarly, The Pursuit of Kindness shouldn’t leave a nasty bruise. (However, as a nearly-three-hundred-page hardback, it is fairly hefty – so I would avoid experimentally dropping it on your toe.) And Owen’s novel may be many things, but there’s one thing it certainly ain’t. An “Aga saga”.
__
The Pursuit of Kindess will be published on 27 May. The trailer film will be released on St Patrick’s Day, 17 March.
A Gilded Age is out on 7 September. The trailer will be released on US Independence Day, 4 July.
Brevity Is the Soul: Wit from Lockdown Ireland is out now.