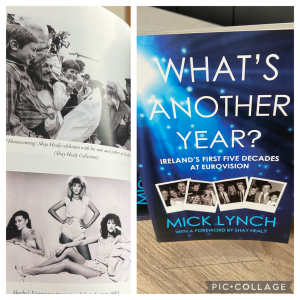 Here at Liberties Press, we were sorry to hear about the death of Shay Healy. Among his many contributions to the gaiety of this and other nations, Shay wrote Ireland’s winning Eurovision entry, ‘What’s Another Year?’ – with which Johnny Logan won the competition in 1980. Logan remains the only artist to have won the competition twice: he repeated the feat in 1987, with ‘Hold Me Now’ (which he also wrote), and Ireland have won the competition more often than any other country.

Mick Lynch borrowed the song’s title for his book – to which Shay kindly contributed the foreword. There’s a lovely photo inside of Shay celebrating the win with his sons and father at Dublin Airport.

People can be a bit sniffy about Eurovision, but it has probably done as much as any economic initiative to cement the idea of Europe in the minds of its citizens. That, and European football. It was a pity the contest wasn’t held during the pandemic – via remote video link from each country. Surely Eurovision was tailor-made for Zoom. It would have helped lift people’s spirits. Just like the photo, Eurovision is something that can bring the generations together – and there are few enough of those.

In 1994, Ireland won the contest for the second time in a row, with ‘Rock ’n’ Roll Kids’. This meant that we had to host it again the following year – a significant logistical undertaking, not to mention the expense involved.

I remember seeing the Director General of RTÉ, the state broadcaster, interviewed about it for the evening news. What he said, broadly, was: “We’re all delighted that Ireland have won again.” But he didn’t seem exactly overjoyed. What he was probably thinking was: “There goes my budget for another year.”