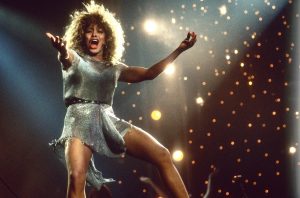 Last night we watched the documentary film Tina, about the remarkable life of rock ’n’ roll legend Tina Turner. When we talk about “legends”, we’re usually referring to someone who’s dead. Thankfully, despite everything, Tina Turner is still very much still with us. Tina was shown as part of the Dublin International Film Festival, sponsored by Virgin Media. Strange as it seems, this year, with the pandemic, it was fairly easy to attend. Kudos to Gráinne Humphreys and the organisers for putting on a festival at all, in the circumstances.
Tina is a riveting, pulsating watch. We were of course aware of the phenomenal success she achieved in her late-eighties revival: the album Private Dancer, and a litany of chart-topping hits, made her a household name. But we don’t know so much about her earlier life, and her first round of fame.
Tina tells an utterly remarkable story. You couldn’t make it up, as they say. Spoiler alert: skip to the last two paragraphs if you don’t want to know the story. “Hardscrabble” and “dirt-poor” doesn’t do full justice to the difficulties of her childhood in Nutbush, Tennessee. Tina was the child of poor sharecroppers, and was abandoned by both her parents at a young age, before being brought up by a cousin (with no financial support from her parents). The church brought out her voice, and she hooked up (at the age of seventeen) with one of the founders of rock ’n’ roll, Ike Turner. Ike heard her voice, and instantly knew he’d found a goldmine. The Ike & Tina Turner Revue was formed, and played across the country, sometimes (we learn in the film) four times a night. He worked the seam – cruelly – until it was exhausted. Or so it seemed.
Despite her stunning singing, dancing and general stage-presence, Tina’s life was a misery. That might have been the end of the story, with alcohol, drugs, suicide or all three providing the coup de grace. After all, a legion of female singers, from Billie Holiday through Janis Joplin to Amy Winehouse, have met a similar fate.
But Tina managed, somehow, to leave Ike – who controlled every aspect of her life, including her gruelling performance schedule, and the vast sums of money she earnt for him. We learnt how, after a particularly savage beating, she left their hotel room while he slept, stumbled via back alleys to a nearby hotel – almost getting run down by a heavy-goods vehicle in the process – and started the process of getting her life back.
It wasn’t easy. For one thing, she didn’t even own her own name. “Turner” was his; “Tina” was the name he had chosen for her (because of its resemblance to that of “Sheena, Queen of the Jungle”). There are parallels here with Muhammad Ali, who after converting to Islam changed his moniker from what he viewed as his slave-name – Cassius Clay – to Ali. Tina chose a different path. In the acrimonious divorce from Ike, she asked for one thing from him: her own name. And, with the help of an army of others, who treated her, and her prodigious talent and energy, with the care and respect they deserved, she turned that name into a global brand, with top-selling singles and albums, global stadium tours (including playing to 186,000 people in Rio) – as well as books, a feature film (with a career-defining starring role for Angela Bassett) and a West End musical.
Through it all, you got a sense of the volcanic determination, energy and optimism of the woman. It would have been far easier to give up – but she never did. What came across most powerfully was the fact that this was the story of one woman’s escape from coercive control. Hers was at all times in the full glare of the world’s media (and they never stopped asking her about Ike), but it was fundamentally the same as that of every woman who has been the subject of abuse.
Somewhat miraculously, Tina Turner not only survived, but, through force of will, turned herself into a global icon, with her as the product. In the process, she also became, in effect, a powerful CEO. And crucially, it wasn’t a miracle: it actually happened. And now we have the film. No doubt she was in two minds as to whether to give her consent to it. Promoting the feature film and the books was evidently difficult for her: she was reopening wounds which had never healed. Every single time, it cut deep. And yet she did it – and is beloved by women, and men, around the globe. She never gave in – or gave up. And neither should any of us. Happy International Women’s Day.
__
Liberties Press has published many books by, and about, remarkable women. We recently released two books by Don Hennessy, a relationship therapist and world-renowned expert on coercive control: Steps to Freedom and How He Wins. Both books include powerful first-hand testimony from target-women, and provide advice for women on exiting abusive relationships. You can read more about them here: buy How He Wins here