The Treaty, A Hundred Years On

#OnThisDay one hundred years ago, the Treaty creating Ireland as an independent public was ratified by the Dáil, the Irish Parliament. This followed what came to be known as the War of Independence, in which “flying columns” – small, mobile paramilitary units – attacked British soldiers and others seen to be associated with British rule in Ireland. Ratification of the Treaty prompted a brutal civil war, between those who supported the Treaty, led by #MichaelCollins, one of the signatories, and those who opposed it, led by Éamon de Valera, who sought full independence for Ireland rather than what he saw as a fatally watered-down version. The conflict set family members against each other and resulted in the deaths of around two thousand people – a large number for a small country. 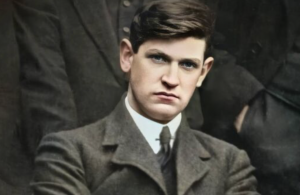 In the wake of the Second World War, it was decided to interview those who had been personally involved in the struggle for Irish independence, as it came to be known. These interviews were conducted by the Bureau of Military History over a ten-year period, up to 1957. In order to encourage interviewees to speak as openly as possible, it was agreed that all statements would be kept under lock and key, at the Military Archives, until the last of the interviewees had died. The process has parallels with the Truth and Reconciliation Commission in South Africa, led by the late Archbishop Desmond Tutu, which sought to lay to rest the ghosts of the conflict of the struggle against apartheid.

Annie Ryan, who came to public prominence when she ran for the Dáil to draw attention to the poor provision of public services for those with special needs, was the first to write a book based on the documents contained in the Military Archives. In Witnesses, a remarkable, ground-breaking piece of work, she stitches together disparate accounts from the archives, on a county-by-county basis, to give a clear and very readable picture of what was happening in Ireland at the time of the Easter Rising – the first major event leading to the achievement of independence. In a second book, Comrades, she considers the documents as they relate to the War of Independence. 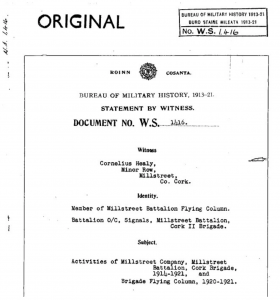 Collins can be regarded as an Irish JFK: a young, charismatic leader who was killed before he had achieved much of what he had set out to do. Without him, Ireland may not have achieved independence at all. But it is a mixed legacy: he can be said to have invented urban guerrilla warfare – for better or worse – and the adoption of the Treaty resulted in the partition of Ireland, which remains in place today, and has been given new force in the wake of Britain exit from the EU.

In a ceremony at Dublin Castle on 16 January, the Lord Lieutenant of Ireland officially handed over power to the new Provisional Government, led by Collins, and wished them luck – presumably through gritted teeth, or in the expectation that the experiment would be short-lived. The handover was as momentous as the execution of King Charles on the orders of Oliver Cromwell in the same month nearly three hundred years earlier. Putting the United States to one side, Ireland became the first country to gain independence from the British Empire, becoming an example for the many countries which were to gain similar independence over the course of the twentieth century – notably India, which modelled its flag on that of Ireland. Collins arrived late to the ceremony – to the consternation of the British. He is said to have commented: “They’ve kept us waiting for eight hundred years. They can hold on for another half an hour.”

Witnesses: Inside the Easter Rising is available here:

Comrades: Inside the War of Independence is available here:

Guide to the Collection