The Friday Read: How Women Were Airbrushed Out of History

We all want to be kind. It is fundamental to our well-being. Yet we live in a world of profound inequality, where only 1 percent of titled land is owned outright by women. Of the 1.2 billion people living in poverty, 70 percent are women or children, and nearly seven out of ten illiterate adults are women. 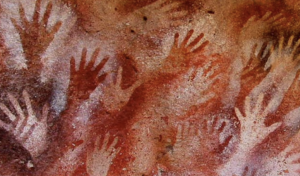 How did we get here? If modern ethnographies of hunter-gatherer societies are anything to go by, our ancestors lived in egalitarian bands where women were shamans, artists and leaders. Analysis of ancient cave art published by National Geographic shows that most of the beautiful silhouettes on cave walls were made by female hands. The Michaelangelo of the Upper Paleolithic was probably a woman. So how did patriarchy begin? How did the equal role of women get airbrushed out of history?

We now have evidence that we are naturally predisposed to be kind and collaborative. Our genes aren’t selfish. Evolution doesn’t care if we are naughty or nice. If kindness helps our genes to reproduce, then kindness and collaboration can flourish. For most of the three hundred thousand years that Homo sapiens has walked the earth, population levels were low. There may have been less than half a million of us twenty thousand years ago, as opposed to seven billion today. In an environment where food and land are abundant, the fittest have a huge incentive to collaborate in hunting and gathering, warding off predators, sharing tools, and intermarrying across bands, rather than competing for resources. Survival of the fittest, for our species, meant survival of the kindest.

There is evidence that a rudimentary moral sense is innate, including research on how three-month-olds track the movements of “good” puppets, “bad” puppets and “neutral” puppets. By the time they can reach for a toy after the show, six-month-olds “overwhelmingly” reach for the good guys. One twelve-month-old used the good puppet to hit the bad puppet over the head.

There’s also evidence that an inner moral voice, a conscience, which applies the emotional brakes on bad behaviour by making you feel good when you do good things and feel bad when you do bad things, is shared by 97 percent of us. Instinctively, we are kind to friends, and we expect kindness in return.

But we are also heavily influenced by the culture in which we are nurtured. As populations soared over the last twenty thousand years, we were forced into conflict, as hungry hunter-gatherer bands started raiding and pillaging. The earliest known war-graves, in Jebel Sahaba near the Egyptian-Sudanese border, are around fourteen thousand years old. We can’t know for sure what caused the conflict – although rapid climate change along the Nile is a likely culprit, with bands forced to compete over dwindling resources. It took another five thousand years before the first cities were founded, in places like Jericho in the Jordan Valley, and Uruk and Eridu in Iraq. Some were built without defences, but by the time writing was invented in Sumeria, five thousand years ago, fortifications were widespread.

As warfare became ubiquitous, men became dominant politically and economically. Writers have speculated about why this happened, citing everything from the development of warrior castes to the accumulation of private property. But the value of kin altruism – showing kindness towards your blood-relatives – forced women into marriages in order to reduce conflict.

Anthropologists have found that high levels of inter-band marriage are strongly linked to lower rates of warfare. Personal and intimate choices about who we want as our partners became strategic decisions about war and peace. Women became assets. By bartering their bodies, chieftains cemented alliances. By giving birth, patriarchies avoided succession crises. By enforcing chastity, they minimised doubts about the legitimacy of heirs. Challenging social rules became taboo. Rebelling to marry someone from the wrong group could lead star-crossed lovers to the same fate as Romeo and Juliet.

For a species that had lived in egalitarian bands for tens of thousands of years, this must have created tensions. We all like to think that we are the good guys. We need to justify our actions, in order to avoid cognitive dissonance. Our inner moral voice was a hindrance, until we persuaded ourselves that coercing women was the natural order of things. Patriarchies cultivated myths of female inferiority, using confirmation-bias to discount evidence that men and women were intellectual equals. We are not sociopaths, but we are natural-born narrators. Convincing ourselves that we were good made it so much easier to be bad.

The shift from partnership to patriarchy didn’t happen all at once, nor did it happen everywhere in the same way. The historian Herodotus scandalised his Greek readers two thousand five hundred years ago when he told them that high-born Egyptian women could witness contracts and go to the public market. He also believed that Egyptian women peed standing up, while men squatted.

In the Hebrew Bible, it was a formidable female judge named Deborah who rallied the Israelites to defeat the Canaanites. A few centuries later, Ruth, the great-grandmother of King David, was a poor childless widow who couldn’t marry a kinsman of her dead husband, until a closer relative relinquished his claim to his property – which included his widow – by formally handing him a sandal. By the time of Herodotus, the heroine of the Book of Esther was a consort of Xerxes I of Persia, after he exiled his mistress Vashti for refusing to parade at court wearing only a crown. Esther went to the king without being summoned – an offence punishable by death – to foil his viceroy’s plot to massacre the Jewish people, thereby negotiating a patriarchy that objectified women, and where failure was fraught with lethal risks.

Women used soft power to make an impact. In third-century Rome, Christianity was a minority religion, practised mostly by fools, women, children and slaves, according to the pagan Celsus – but under the influence of his Christian mother, Helena, the new emperor, Constantine, issued the Edict of Milan in 313, the first law protecting freedom of worship in Western history. Thirteen hundred years before the Enlightenment, Church and State protected religious minorities. State-sanctioned witch-trials fell into abeyance in the Dark Ages for more than a thousand years, as elite figures taught that it was superstitious to believe in sorcery. As late as 1431, when the nineteen-year-old Joan of Arc was captured during the Hundred Years War between England and France, the seventy charges laid against her included smears about witchcraft, but it was her heretical proclivity for cross-dressing – as a soldier – which was used to light the pyre. It wasn’t until 1487, around the time da Vinci was drawing helicopters, that misogynistic fake news about witches went viral with the release of Malleus Maleficarum. A sort of Witch-hunting for Dummies, it led to the “gynecide” of the Renaissance witch-hunts, where at least three-quarters of the victims were female. The only institution to dismiss the hysteria completely was the Spanish Inquisition, founded by Queen Isabella, which was busy executing Jewish conversos for heresy.

By the nineteenth century, women were reasserting their rights, travelling independently to California to marry – and reducing homicide rates in the Wild West ten-fold in the process. Settling down is still linked to reduced criminality today. The rationale for patriarchal alliances was lost in the ashes of World War I, as millions died, despite the fact that the grandsons of Queen Victoria sat on the thrones of the UK, Russia and Germany. Since World War II, the increasing influence of women has driven the rise of the welfare state, and political pressure to prevent wars of aggression.

Covid-19 may be one of the greatest catalysts for change in the modern era. The lockdown hit women in the service sector hard, in what has been described as a “she-cession”, but it also saw men stepping up to provide more childcare. It proved that remote workers can juggle domestic obligations between Zoom calls and still be effective – a trend which may be felt in more flexible working practices and greater equality. As the pandemic puts things into perspective, women are no longer being airbrushed out of history. 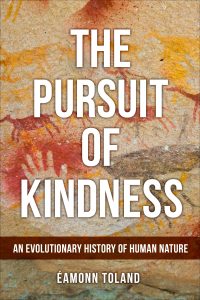 Éamonn Toland is the author of The Pursuit of Kindness, available now from bookshops in Ireland and the UK, and from https://libertiespress.com/product/the-pursuit-of-kindness/