The 12 Blogs of Christmas #3: On Making a Start in Publishing

There are plenty of people looking to get into book publishing; inevitably, they want to know a bit more about it before they begin. One of the truisms is that “The people are lovely, but there’s no money in it.” (This echoes what the late, great Maeve Binchy had to say about publicity, as a form of advice for authors launching out onto the literary high seas: “Everyone’s wonderful, and don’t mention the money.”) The first part of this sentence is true – or rather, the proportion of people you’d rather not run into in a dark alley is on the low side. The second part, unfortunately, is also on the mark: once people value books as highly as, for example, cars, or life insurance, this situation may change. Until then, probably not.

Another comment that is regularly trotted out? “You must spend a lot of time reading.” Well, yes – though not as much as you might think. At the risk of stating the obvious, a publishing company that resembles a library, lacks dynamism.

Of course, the only way of really knowing what an industry is like is to work in it – and find out at first hand. In the meantime, though, there are shortcuts. One is, perhaps unsurprisingly, to read a book on the subject. There are plenty of good memoirs of literary life – from the publishing rather than the writing side. A few that spring to mind are AN IRISH PUBLISHER AND HIS WORLD by John M. Feehan, who founded Mercier Press, Ireland oldest independent book publishing company, now approaching its eightieth anniversary; ONE PUBLISHER’S WAR by Steve MacDonagh, founder of Brandon Books (now part of O’Brien Press). Also, PURSUIT by John Calder: a tome of book, but the fact that no holds are barred, makes for great entertainment. And PENGUIN SPECIAL, the biography, by Jeremy Lewis, of legendary founder of Penguin Books Allen Lane (who, as it happens, died a year to the day before one of the co-founders of Liberties Press was born). Diana Athill’s books – including STET – are all beautifully written, and a joy to read – as well as offering a clear-headed insight into literary publishing. (As the industry shifts, there will be more memoirs by women, and people of colour; at the moment, they are fairly thin on the ground.) 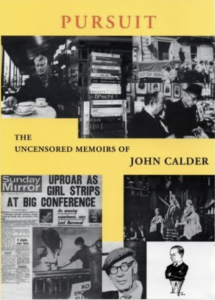 But TV offers a faster shortcut. One series that comes highly recommended is CALL MY AGENT on Netflix (four seasons). It tells the tale of Paris talent agency ASK. There are star turns from many of the big names of French TV and cinema – usually sending themselves up – including Juliette Binoche and Isabelle Adjani. The show’s approach owes much to EXTRAS, the series created by Ricky Gervais and Stephen Merchant*, in which Ben Affleck, Kate Winslet and others are up for poking fun at themselves. (“Is that meant to be funny?” “You tell me. You were in it.”) Each episode deals with some minor crisis, meltdown on the part of the star, a problem with production, or whatever. CALL MY AGENT was created by Fanny Herrero; many of the episodes were written by Dominique Besnehard. Herrero and Besnehard have both worked in and around Paris talent agencies for years. They know whereof they speak, in other words.

The show points up the rivalries, jealousies, and occasional couplings of the agency’s staff and owners, as they seek to promote their clients in the dog-eat-dog world of French TV and cinema – and, at all times, keep the show on the road. The character-types will be familiar to anyone who has worked in publishing: the thrusting young things, the elder lemons dispensing acerbic wisdom; the money men (and women); the temperamental talent. None of them are angels, and yet there is a certain decency at the core of the show: they all work together, albeit in a rather messy way, for a common good – in much the same way as everyone who has ever worked at a publishing company, or in any other creative business, does. The final episode of the show (no spoilers) is, suitably, bittersweet. (A fifth season is in the works.) 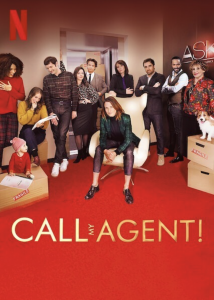 A final thought. Book publishing is a cultural business. We need to nurture the cultural side, certainly: if you lose sight of that, or don’t care about it in the first place, you may as well not bother being a part of it at all. But it is also a business. And if you neglect that side of things for too long, your company may not be around for too long. Which would be a pity, because it can be great fun. And it is possible, just about, to make a living from it – which, at the end of the day, we all have to do. As they may or may not say on CALL MY AGENT: Bonne chance, les mecs!

*After watching the classic film ALL THE PRESIDENT’S MEN, Stephen Merchant decided he wanted to be an investigative journalist. As there wasn’t much political corruption to investigate in rural Dorset at the time, he went into screenwriting and acting instead. We’re all very glad he did.