The 12 Blogs of Christmas: #2 On Language and Illness

Those who signed up to fight in the first world war were told it would be over by Christmas. Years later, they were still slogging it out in the trenches.

In 2010, we were assured that we would be bouncing back from the financial crash before we knew it. It took the best part of a decade for a full recovery to take place.

And here we are, in our second Christmas of the global pandemic. It’s hard to resist the conclusion that, based on past experience, we might be stuck in this particular rut, or something like it, for several more years to come. As in every era, no one can accurately predict the future – though some claim to be able to do so. 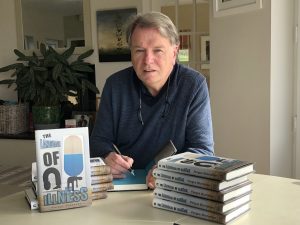 In the depths of the pandemic last year, we published a notable book: THE LANGUAGE OF ILLNESS by Fergus Shanahan. In it, Fergus, a world-renowned gastroenterologist, wrote, with wisdom, humour and humanity, about the language we use when we talk about illness. It is a remarkable book in many respects: for the breadth of experience, both clinical and personal, on which the author draws; for his wide reading on the subject of illness, in different eras; for the elegant way in which he writes about universal subjects. It is of interest to all those who have been, or will at some stage be, ill; for their friends and family members; and for all those working in the health-related professions, to whom we have become so indebted this past while.

What comes across in the book loud and clear, as in the pandemic itself – and the environmental crisis, for that matter – is that we are all, rich and poor, black and white, young and old, basically the same. We are creatures who are susceptible to disease and natural disasters, who have to stand together, and work together, for the common good – otherwise all falls apart.

Strikingly, THE LANGUAGE OF ILLNESS has been praised equally by those from both sides of the great divide: artists and scientists. Why should there be such a chasm between the two camps? The great poet-doctor William Carlos Williams advised, nearly a hundred years ago now, that poets should write for those of a scientific bent, “from among whose ranks your best readers will come”. All these years on, many of us still choose to ignore his message. 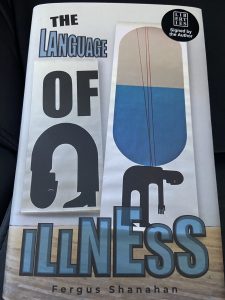 THE LANGUAGE OF ILLNESS was extremely timely, given that it came in the middle of a major health-related upheaval. But it is no less relevant now, a year or so down the road. We are still living with illness, and still using language – and will doubtless continue to do so while human civilisation exists. To quote Williams again, Fergus Shanahan is observing the particular, to discover the universal. THE LANGUAGE OF ILLNESS is one of the finest books we have published – in this or any year. As the pandemic continues to rage, we recommend it very highly. Like listening to a sad song, reading about illness can be strangely uplifting, in these disjointed times.