Nigel Slater* gave us his “twelve tastes of Christmas” recently, so we thought we’d pitch in with a few festive posts of our own. We’ll be posting every other day through December – if we can stand the pace. Of course, we’ll be recommending a few books along the way – particularly some lesser-known gems.

Bob Dylan released an album of Christmas songs a while back: it was played on repeat in the Liberties office that year, as I recall. In one of the interviews Dylan gave promoting the album, the songwriter was asked: “Mr Dylan, it sounds as though you’re moved by what you’re singing about. Do you believe in God?” Dylan’s response? “I believe in the music.”

It’s kind of the same with food and drink. Whatever you think about the season, and its many associations, religious and otherwise, good food has to be at the heart of it. A meal eaten with others brings people together, and lessens ill-feeling which may have festered over the course of the year; preparing it is a true expression of love. 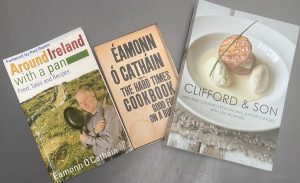 We’ve brought out a few notable cookbooks over the years. Our third release, way back in 2004, was AROUND IRELAND WITH A PAN by the redoubtable Éamonn Ó Catháin. In it, Éamonn takes a tour around the island of Ireland: there are thirty-two chapters, outlining a feast of local specialities, and discussion of the best restaurants, shops and markets – along with plenty of recipes, notably from France, where Éamonn trained. Glad to report that many of the establishments he mentions are still there. Éamonn is a fine writer, and brings every corner of Ireland sparklingly to life. He followed it up with THE HARD TIMES COOKBOOK – which features hundreds of recipes for those on a budget. The coffee-mug stain on the cover is free.

Tom Doorley’s EATING FOR IRELAND is a something of a minor classic. A collection of mini-essays reflecting on good eating in all its forms, from fine dining to home cooking and all points in between, it bears comparison with one of Mr Slater’s lesser-known works, Eating for England. (OK, we may have borrowed the name, but getting an endorsement from Gay Byrne was all our own doing.) Above all, it celebrates the unfashionable – from McDonald’s (praised for, among other things, their reduced-salt ketchup), red lemonade and Tayto crisps. (When Nigel Slater made a rare public appearance in Dublin a couple of years ago, he was interviewed, spiritedly, by Marian Keyes. It was an entertaining evening, with Marian covering everything from the foxes which had destroyed Nigel’s garden to the influence his parents had on his approach to cooking. At the end of the evening, Marian presented Nigel with a foodie gift. Not barm brack, soda bread, or anything else you might associate with the country, but a multipack of Tayto crisps. The visitor couldn’t have been happier.)

But the jewel in the crown has to be CLIFFORD & SON by Peter Clifford. The book features recipes – and mouth-watering photographs – of Peter’s recipes, along with some from his late father, Michael – another well-known figure on Dublin’s, and Cork’s, restaurant scene. The book is available in both hardback and paperback editions: it bears comparison with the very best cookery books out there, and would make a fine addition to any food-lover’s collection.

Special mention, on the liquid side, to Iorwerth Griffiths on his BEER AND CIDER IN IRELAND – sadly no longer in stock. It highlighted the great range of independently produced beers and ciders in Ireland, at a time when the craft market was only getting started. Of course, now there are hundreds to choose from, but back then, you had to hunt them out.

We pride ourselves on being ahead of the posse, rather than following the latest trends. And long may this continue – as well as the good fellowship, and great sensory enjoyment, which comes with Yuletide feasting!

*Credit to Nigel for having escaped the curse of the unfashionable name. It is said that the main reason Tim Henman never won Wimbledon is that his first name just wasn’t sufficiently epic for world-beating exploits. Mr Slater was subsequently joined on the famous-Nigels pedestal by EU-smasher Mr Farage. Though others might remember a certain decent handlebar-moustachioed F1 driver. Step forward, Mr Mansell.