Sometimes, it takes a lifetime to become an overnight success

I recently took part in a (virtual) session at the Science Foundation Ireland Summit on writing, and publishing, books on scientific subjects. It was a jolly event, and even included some discussion on strong language, Fergus Shanahan taking issue with Luke O’Neill over the title of his new book – and pointing out that there was a well-known north Dublin variant of the word “b#llocks” that he should have used instead. It was a nice moment. You probably had to be there.
One of the things I liked about the session (particularly the pre-event chit-chat*) was the talk of rock and roll. I’m more used to literary-type events (rather than science-type ones), and I don’t think music, of any kind, has ever featured – at least not that I can remember. Perhaps I’ve been hanging out with the wrong people all this time. In fact, I’m reminded of the words of one of my heroes, the doctor-poet William Carlos Williams, giving advice to younger poets on looking for readers among what we would now call the science community, “From among whom some of your best readers will come, if you have any sense.”
I digress. The panellists said many interesting things, and of the several memorable things Fergus said, one has stuck in my head. When he was asked by the host, Claire O’Connell (herself co-author of a fine book, just published, on, and with, the Nobel laureate William C. Campbell**), about his writing process, Fergus responded: “I’ve basically been writing this book for the last forty years.” Obviously not literally, but you get the point: he has distilled his professional, and personal, experiences, into a couple of hundred pages of text. This might make the book sound dry and uninteresting. It is not. It is warm, readable, and above all, deeply human, and humane. Unlike with many books, you feel as though you’re being addressed by a real, live human being, not an expert, pontificating from on high. And how refreshing that is, in the age of the algorithm. In short, it’s a remarkable piece of work; I defy anyone not to find something of value in it.
In fact, I would go further, and say that, based on the couple of hundred books I’ve published, and the hundreds more I’ve edited, The Language of Illness is something approaching a masterpiece. You needn’t take my word for it. (Nor should you: I have a vested interest in the book succeeding; skin in the game, as they say in poker circles.) Muiris Houston called the book “wonderful”; Deirdre McGrath, “a must-read”; John F. Deane, “a treasure”; Deirdre Bennett, “a tour de force”; and Desmond O’Neill, “a classic”. And that’s just a handful of them – and very shortened versions, at that. (You can blame Twitter’s character-limit.)
Annie Proulx’s novel The Shipping News was published when she was fifty-eight. For my money, she is the finest living writer of English (as opposed to “English writer”). But she didn’t exactly rush into it, did she? I don’t know how old Fergus is, but it would be fair to say that he isn’t a blushing ingénue. And The Language of Illness is not his first book. He’s the author of around 750 publications and articles. I’m not familiar with them. As I said, I’ve obviously been hanging out with the wrong people. Come to think of it, he’s about as far from being a “celebrity author” as you could hope to find. He may have to get used to dealing with a little more attention in the future.
Publishing history is littered with could be described as glorious failures: books which, for whatever reason, were virtually forgotten soon after seeing the light of day. Well, it’s not happening this time. Not on my watch.
//
Seán O’Keeffe is the Publisher at Liberties Press
// 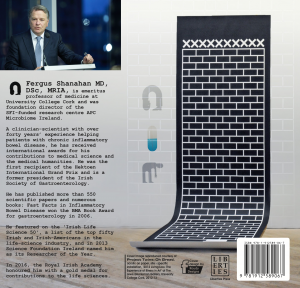 Prof John Crown’s review of The Language of Illness appeared recently in the Irish Times. Don’t leave it too long to order your copy (of the book, that is). There were only 1000 copies of Ulysses printed in the first run. It would be nice to have one now. In the words of the inimitable Harvey Norman: once they’re gone, they’re gone.
* Chitchat features in The Language of Illness – on page 66, as you ask.
** If you asked a person on the street to name as many of Ireland’s Nobel laureates as they could, a fair few would be able to reel off one or all of the “awesome foursome” (to quote, of all people, the British PM) of Heaney, Yeats, Beckett and Shaw. (The fact that you know who they are based on their surnames alone, tells its own story.) One or two might even give you Seán MacBride. I’d hazard that not many would say William C. Campbell. And Ernest Walton – another scientist – is not exactly a household name either. Another situation that needs changing.