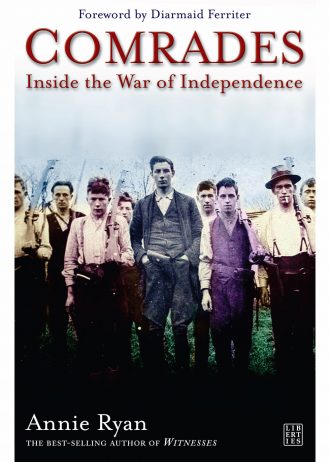 This thought-provoking book retells the 1916 Rising story through previously unavailable first-hand accounts from the protagonists. Illustrated with unpublished and rare photographs, this book also features an introduction by well-known historian and author Dr Margaret Mac Curtain.

Witnesses: Inside the Easter Rising is the first book to draw on official witness statements taken over several years from the late 1940s onwards by the government of the time and only released to the public by the Bureau of Military History in 2003.

In its judicious use of the statements given by the foot-soldiers and second-line participants in the Rising, the book provides a unique perspective on the events of Easter 1916. From the volunteers walking the Royal canal from Kildare to fight in Dublin (of which the author’s father was one), to the women fighting, smuggling guns and cooking for the insurgents in the GPO, Witnesses transports the reader alongside those taking part in this pivotal event in modern Irish history.

Insights into controversial matters such as the decision to countermand the order for the Rising on its eve, the so-called Castle document, as well as the personal affections and jealousies of those involved, are all discussed in detail. There are also previously unpublished photos taken inside the GPO during Easter week.

Above all, the book is told with tremendous warmth, the voices of combatants and their contemporaries ringing out in clarity and honesty about the awful, heroic and occasionally amusing incidents that took place around this period of history that helped cement the modern Irish identity.