Around Ireland with a Pan: Food, Tales and Recipes

Éamonn Ó Catháin, the former proprietor of the trendsetting Dublin bistro Shay Beano, is a renowned chef turned broadcaster and writer, who can be found regularly parading his encyclopedic knowledge of food (and music) on TV, radio and in newspapers and magazines. A fluent Irish and French speaker, he is a regular on RTÉ’s The Afternoon Show and the linchpin of TG4’s food-based programming. He lives in Belfast between culinary expeditions at home and abroad. 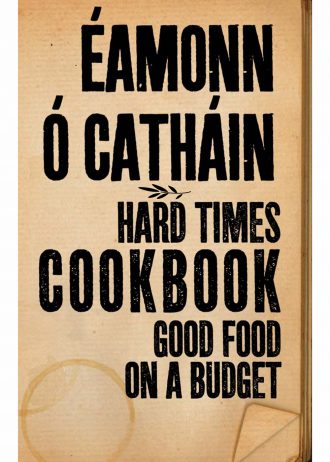 The Hard Times Cookbook: Good Food on a Budget

Around Ireland with a Pan by Éamonn Ó Catháin is a culinary guidebook to Ireland by one of our most well-known chefs and winner of Best Local Cuisine cookbook in English in the prestigious Gourmand World Cookbook Awards.
Ireland is becoming increasingly well-known around the world for its vibrant food scene, from superb seafood to wonderful organic meats, fruit and vegetables, and craft-produced cheeses and beers. In Around Ireland with a Pan: Food, Tales and Recipes, Éamonn Ó Catháin discusses the traditional food cultures of all the counties of Ireland, North and South.
He looks at how tastes — and standards — in food have changed over the years and gives his impressions of some of the outstanding restaurants, food markets and food shops to be found on this island. He also reflects on his own love of food and on his experiences of running restaurants, and speculates on what the future holds for Irish food.