No prophet is accepted in their own land

The brand-leader – promoted at great expense – has a habit of sucking the oxygen out of the room for everyone else. This is no less the case with authors, and books, than with anything else. Ted Hughes was taking tea with the Queen while Basil Bunting, virtually unknown, was commuting to his newspaper job in Newcastle – and yet the latter is by no means the lesser poet of the two. His long poem Briggflatts is a modernist masterpiece, and well worth seeking out.

Similarly, ask the average person is the street to name an Irish poet. Why, Seamus Heaney, of course. But then, how about John Montague, Michael Hartnett – or, for that matter, Paula Meehan? (For generations, women might as well not have existed when it came to the arts, in all countries. Things are changing fast – but cannot compensate for the repeated losses sustained by previous generations.)

The publication of Silverview, the posthumous novel by the great crime writer John le Carré, has been eagerly awaited. (It still comes as something of a shock to read his nationality as: “British (1931-2020), Irish (2020)”. An unexpected person to wrap himself in the Tricolor, perhaps. But then, we are all complicated beings – a complexity which le Carré reflected in his many books, investigating the shady world of espionage – and personal loyalty.) And rightly so: Silverview is the final work by an acknowledged master.

And yet. You also have to seek out the good stuff. It takes a little time – and effort. Which is why large corporations are always more comfortable with consumers making hasty, ill-informed decisions. This goes for bookselling as much as for anything else: the customer who rushes in to buy a book on Christmas Eve is a sitting duck.

Philip Davison is a novelist to rank alongside the greats in his field – and here he is, right under our noses, as good as unknown, except among a small, devoted tribe. His new novel, Quiet City, is sharper, and darker, than much of his previous work – and it has a killer set-up, which we won’t spoil for you.

But then again, don’t take our word for it. Roddy Doyle describes Quiet City as “a short jab of a novel”; Joseph O’Connor says that Davison is “a storyteller of rare gifts”, and Frank McGuinness notes that he produces “works of genuine, great ambiguity”. Bob Geldof puts it best, and characteristically bluntly: “Philip Davison is Ireland’s best-kept secret.”

We intend to attempt to set things straight. It is time, as one of the Northumbrian poet’s early admirers put it, to “let the bunting fly”. 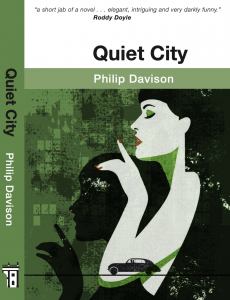