New Perspectives at the National Gallery

At the weekend, I was lucky enough to get to the National Gallery to see the exhibition New Perspectives: the artworks the gallery has acquired over the past decade. Alongside some fine oil paintings – which you might have been expecting – there are plenty of photographs, as well as line drawings, along with one or two installations.

What a sheer, undiluted joy it was to be out in a public space once again, appreciating some very fine artworks. (It helped that the streets were almost empty, and that there was bright sunshine, at the end of what had been a torrentially wet week.) I’d forgotten how much I’d missed it. Going to the cinema again will no doubt evoke similar feelings. Even better, because of social-distancing rules, you felt you had the art all to yourself: there were rarely more than two or three other people in a room with you. Luxury – and a far cry from joining the scrum around the Mona Lisa in the Louvre as a teenager: a hundred people clustered around a small painting which they had already seen reproduced many times, even in the days before social media made images ubiquitous.

Three things jumped out at me. First, as far as I could make out, all the artists whose works were on display were either no longer with us, or elderly. In an age in which we bow down before youth, this was refreshing. After all, if someone has a bit of talent at age twenty, by age eighty, if they stick at it (an important caveat), they are likely to have improved significantly. The phrase “late flowering” comes to mind.

Second, work by women artists was generously represented. I don’t know that the ratio was fifty-fifty – I couldn’t be bothered to count – but there was certainly no “let’s throw a few women in there” tokenism. Hopefully those days are permanently behind us. As women move into the public realm, men are moving into the private realm, in which they have traditionally played a minor role.

Third, the notes on the exhibition included the following line (I paraphrase): “Between 2011 and 2017, no budget was available for acquiring works.” I had to read this twice. For the bulk of the ten years under consideration, the gallery had no funds to buy anything. And yet here were these great works, in front of us. The answer to the puzzle: donations (supported, presumably, by tax incentives). Anyone who seeks to tax the rich into oblivion would do well to remember that, as William Carlos Williams put it, “they have their uses”. In this case, without them, the cupboard would be bare indeed. They have helped create a national treasure in the heart of our capital – and one which grows and develops year by year. Kudos to those (presumably a committee) who selected the pieces: there wasn’t a dud among them.

Art often presents what seems like a mundane scene, delivered with a twist. There were many striking pieces in the exhibition. One which caught by eye was Homo Sapiens: An Allegory of Democracy by Seán Keating (top left in the picture). The piece shows an ordinary citizen, wearing hat and glasses, and clutching a gas-mask, looking slightly upward, startled or afraid (or perhaps both) at what is heading his way from the skies. He is surrounded by the trappings of church and state, in the shape of the courts and the armed forces. It looked like a reference to the Second World War, but given that the piece was made in 1929-30, the artist was no doubt looking back to the senseless carnage of the First World War, as well as ahead to the genocide of the Second – of which he had an intimation. 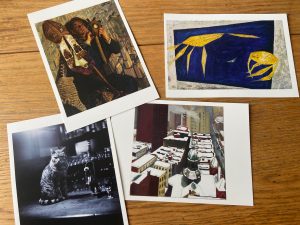 Éamonn Toland refers often to Homo sapiens in his new book The Pursuit of Kindness. While casting a cold eye on the horrors we have inflicted on each other, particularly in the last century, he strikes a hopeful note: humans are inherently sociable and cooperative, and we need to go back to these qualities, along with kindness itself, if we are to survive, and thrive, into the future. It is a very fine piece of writing, by a debut author (though Éamonn is no blushing ingénue) and will stimulate much debate. You could do worse than pick up a copy in one of our wonderful (and recently reopened) bookshops in the city centre after viewing “New Perspectives”.

The Pursuit of Kindness by Éamonn Toland is published by Liberties Press on 27 May. The book is being launched, via zoom, by Alan Rinzler, editor of Bury My Heart at Wounded Knee, at 6pm Irish time on that date:

The book is available in bookshops and here: