With Storms Dudley and Eunice menacing these islands – have a pair of storms ever had less threatening names – now might be a good time to consider a historical threat to these shores from a thousand years ago.

Last night, National Geographic showed a film called Viking Apocalypse, directed and written by Stuart Elliott. The programme centred on the discovery, in 2009, by a construction crew building a new road, of a mass grave near Maiden Castle, an Iron age hillfort in Dorset, on the southern coast of England. The grave dated from around 1000 AD; researchers’ first guess was that the remains were those of warriors killed in a battle between the local Anglo-Saxons and the invading Vikings. Alternatively, the bodies belonged to the inhabitants of an Anglo-Saxon village, put to death by the invaders. The reality proved to be substantially different. 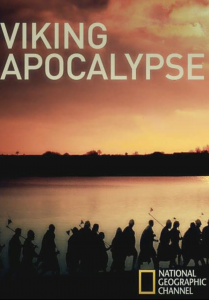 Excavation and research revealed that all fifty-four bodies were those of men. Notably, very few of them had the type of wounds which you would expect from people who had died in battle. Most strikingly, they had all been beheaded. They were buried without possessions, and the heads were placed to one side. Three of the skulls were missing. Investigation of the skeletons’ tooth enamel revealed that all those in the grave had grown up in a cold climate. In other words, they were not inhabitants of the local area, but from Scandinavia: in all likelihood, they were all Vikings. Their upper bodies were well developed, suggesting that they may have been skilled rowers.

King Athelstan’s reign had begun with portents of the End of Days: blood-red clouds, and suchlike. He had paid a fortune (ten thousand pounds, equivalent to around seventy-five million dollars in today’s terms) to bribe the Vikings to stay away from England. (Today of all days, readers will be familiar with the concept of paying someone off in order to make a problem go away.) Unfortunately for Athelstan, the Vikings took the money – and ignored his request. The raids continued.

Piece by piece, researchers built up a picture of what may have happened at Maiden Castle. It may have gone something like this. A Viking longboat arrived in the harbour, teeming with warriors. Word spread among the local people. When the Vikings made camp inland, they were taken by surprise by a large band of Anglo-Saxons, and all were captured alive. They were tied together with rope, and marched up to the hillfort, where a ridgeway met an old Roman road. There they were executed, by decapitation with a sword, each one facing their executioner, and bravely looking him in the eye as they met their fate.

One of the strangest aspects of the whole episode is that, in having the warriors face their executioner, all parties were reenacting a Scandinavian saga. The Anglo-Saxons clearly knew the traditions of the invaders, and were giving these warriors a death which befitted their status and skills.

The symbolism of the place of execution was important. The Anglo-Saxons were Christian. The burial-mounds at the hillfort were associated with the dark, pagan past. The Vikings were a new pagan threat. It was as though, in the eyes of the Anglo-Saxons, the pagan invaders had come from hell, and, in death, were being sent back there.

What of the three missing skulls? Maidan Castle can be seen for miles around in every direction. Perhaps three of the heads – of the leaders of the Viking war-band, maybe – were placed on stakes, as a show of power on the part of the Anglo-Saxons, and as a warning to other Viking raiders who might try a similar attack in the future. (Prints of London show a similar practice in later centuries on the old London Bridge.)

So, a brutal passage in the story of our islands. There is no moral to this grisly tale, but two things come to mind. First, that initial appearances can be entirely deceiving. And second, that the truth is often darker, and stranger, than anything a storyteller might choose to make up.

THE FIRST HERESY, the new novel by financial commentator Eddie Hobbs, is available now in bookshops and online. The book is a Dan Brown style adventure story which draws on aspects of medieval Irish and French history.