From genre bending to gender bending

Delighted to see the new review from Anne Cunningham, syndicated across a number of Irish newspapers, of Owen Dwyer’s new novel The Garfield Conspiracy. The book tells the tale of a successful novelist whose world unravels when he begins a relationship with an attractive young publishing assistant while researching his stalled book on the assassinated US president James Garfield. Anne describes it as “a most unusual and excellent yarn” with “a killer ending” – and we heartily agree. 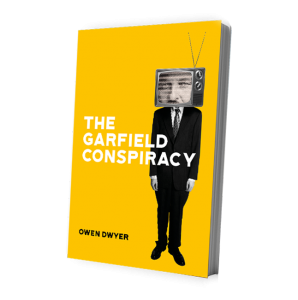 Anne rightly describes the book as “genre-bending”: it has elements of historical fiction and psychological thriller. I’m reminded of William Carlos Williams railing against “the kind of order that requires the crab’s pincers to be cut off in order to fit it into the box”. We all have a tendency to want things to come in neatly packaged boxes – for our favourite rock stars, for example, to keep playing their old hits, rather than trying out new material. But the new material is the important stuff – and ultimately more challenging, and exciting.

Owen’s last book, Number Games, published by Liberties a couple of years back, is set in a post-apocalyptic Ireland, in which gender roles are reversed. (Gender-bending as well as genre-bending, then.) So it’s science fiction. But why put it in that particular box? The Garfield Conspiracy, like Number Games before it, is a work of fiction – and worthy of your time and attention.

Kudos to Owen. He’s one of the sharpest novelists writing in Ireland at the moment. Both books comes highly recommended. Crab claws firmly included.

With thanks to the publicists working on the release: Deirdre Roberts in Ireland and Anna Zanetti of Midas in the UK and Ireland. Not to mention the fine jacket by designer Baker of Plan B Associates.