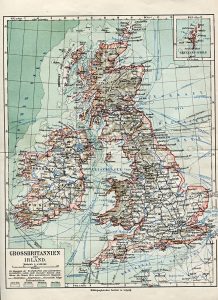 Around a century ago, Ireland was plunged into a bloody civil war. The conflict pitted neighbour against neighbour, divided families, and resulted in an estimated two thousand deaths – a large number for a small country. When the shooting stopped, how was the simmering conflict resolved?

Ultimately, a great deal of the healing was done – strangely enough, perhaps – on the (Gaelic) football pitch. Although fights often broke out during matches, and injuries were sustained (and in hurling, all participants carry what are, in effect, wooden weapons), the chances of actually losing your life while playing a game, as opposed to fighting a war, were always fairly remote. The remarkable success of the Gaelic Athletic Association in bringing together, piece by piece, the two sides in what had been an exceptionally bitter internal conflict, is one of the reasons why the organisation is arguably Ireland’s most beloved institution, known to every community around Ireland, and among Irish people the world over – at a time when love for institutions is in fairly short supply. (Only Guinness comes close.) Testament to the success of the project is the fact that the successors to the two sides in the civil war, the political parties Fianna Fáil and Fine Gael, are now in government together for the first time – something which would have been literally inconceivable to an earlier generation. Where South Africa, in a later period, had the Truth and Reconciliation Commission, Ireland had the GAA.

Something similar may be happening in England right now. For decades, sporting fixtures between Germany and England, particularly in football, the national sport of both countries, were somewhat toxic affairs, tinged with the fairly recent memories of two apocalyptic conflicts in which both countries had played a leading part. The players seemed to give off the feeling that they were re-fighting the Somme, or Dunkirk, or some other momentous battle from one or other of the two world wars. Often these parallels were explicitly stated, in the national media and by the average person on the street. The far right, and hooliganism, always seemed to be lurking just round the corner.

This time, things felt completely different. OK, the German national anthem was booed, but otherwise it was a pretty good-natured affair, both inside and outside the ground. The sight of people gathering together, and celebrating, after having been kept apart for so long, was in itself enormously uplifting.

But how to explain the euphoria that has accompanied the victory – and the expectation for the matches ahead? The better team won on the day. Raheem Sterling, who scored the opening goal, has immediately become a national icon – and rightly so. He is as important a figure in football, for England fans, as the Williams sisters are in tennis. Given the abuse that he has received over the years, the calm and measured way in which he answered the interviewer’s questions in the din after the match, spoke volumes about his character. And ultimately, great sporting events are about just that: national character. England are, arguably for the first time, a proper rainbow team – much like the South African rugby team which won the World Cup post-apartheid in 1995, or the French team which won the football World Cup in 1998. (And both of these tournament wins were on home soil, as it happens.)

But there is more to it than that. The England-Germany fixture has often served as a reminder, to England supporters, of how far Germany, as a country, has travelled since 1945, and how little progress, relatively, England has made. To give one example, from the publishing industry: in 1947, amid the post-war wreckage, Frankfurt hosted a small international book fair, in Nissen huts. The Frankfurt Book Fair is now the premier gathering of the international book world, with more than seven thousand exhibitors from in excess of a hundred countries in 2017. It even has its own Metro station.

While Germany underwent an economic miracle, and reunification (a process helped along, incidentally, by Ireland’s presidency of the EU in 1990), England was somewhat reluctantly giving up an Empire, and trying to find a new place in the world. The bitter irony of this, in a country which had given so much to defeat the global menace of fascism, was not lost on football supporters. Trying to relive past glories is never an easy path to take – especially when you come up short. This time – gloriously, unpredictably, and despite all that had gone before – England actually won.

As an England fan commented on Twitter (I’m paraphrasing): “We don’t hate you. It’s just that you’ve been so good for so long, and we’ve been so mediocre. It was great to beat you.”

In some ways, whether England win Euro 2020 is beside the point. An important start has been made, in an entirely new direction. It’s a thrilling – and deeply moving – thing to witness, and be a part of.

The First World War has all but slipped out of living memory, and it won’t be too long before the same thing happens with the Second. Never forget, certainly. But at some point, you have to let them all go, and move on with your life.

On 14 July, Liberties Press will launch its new fiction imprint, Ely’s Arch. The first release under this imprint, The Garfield Conspiracy by Owen Dwyer, will be available for preorder on American Independence Day, 4 July, ahead of its release on 7 September.