Brevity Is the Soul: Out with the Old

Let’s call a spade a spade: 2020 will not go down in the annals as a vintage year. The birds continued to sing (more often than before, in fact), and the sun came up in the morning; other than that, many of the things we enjoy – sport, the arts, meeting friends and family for a drink, or a meal, or just a chat – were cancelled, by government order. The year ended with a little brightness when Sleepy Joe kicked Abraham Lincoln out of the White House. Or something.
So when I got a call from Owen Dwyer during what we will in future refer to as Lockdown I (remember that? loo-rolls loomed large, as I recall) asking me if Liberties Press would be interested in helping run a competition to find the best funny stories from Ireland’s writers, published or unpublished, during lockdown, I jumped at the chance. Comedian Kevin Gildea agreed to judge the entries, and we were on our way. (Helpfully, Kevin was in the process of opening Kevin Gildeas [sic] Brilliant Bookshop in Dun Laoghaire. Don’t get me started on the apostrophe.)
Irish Pensions & Finance generously provided the prize money: third prize was €1000; second was €500; first was €300. (It seemed like a good idea at the time, but if I had a euro for every person who told me we’d got the prizes the wrong round, I’d have, well, at least three euro by now.) Twenty-two thousand public-sector workers got the email – along with as many members of Ireland’s writing community as we could lay our hands on (thank you, Writing.ie) – and several hundred of them answered the call, as it were. And if writing a funny short story might not save the world, at least it passed the time – and potentially put a smile on someone’s face. 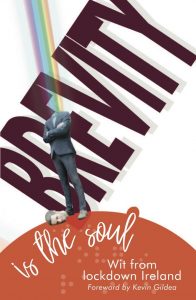 Six months later – on the day Lockdown II came into force, in fact – we had our winners: three stories (four, in fact) which, in the opinion of the judges (which shall be final) are, at the very least, pretty funny. (Declaration of interest: I didn’t personally judge, or even read, any of the entries. For one thing, there were too many Liberties Press authors in the mix. But I did use an entire heavy-duty toner cartridge printing the damn things off.)
In true comedy style, the top prize was split between two entries. So three of the four winners received exactly the same amount of prize-money: €500. You couldn’t make this stuff up. Flann O’Brien would have been proud.
Anyway, I’m very glad we did it. The whole thing was a lot of fun – which was precisely the point, I reckon. I hope you enjoy the stories. We’re publishing the winners, along with the runners-up, and all the shortlisted entries, in a real, live, flesh-and-blood book (and an e-book too), today.
So, let’s take that spade, and use it to shovel the steaming pile of manure that was 2020, and fertilise another little patch over there. We could call it, oh, I don’t know . . . 2021.
—
Brevity Is the Soul: Wit from Lockdown Ireland, with a foreword by Kevin Gildea, is published today by Liberties Press, priced €12.99. The book is available now from bookshops and LibertiesPress.com. You can read more about the book, watch the video of the winners being announced, and order a copy, here: